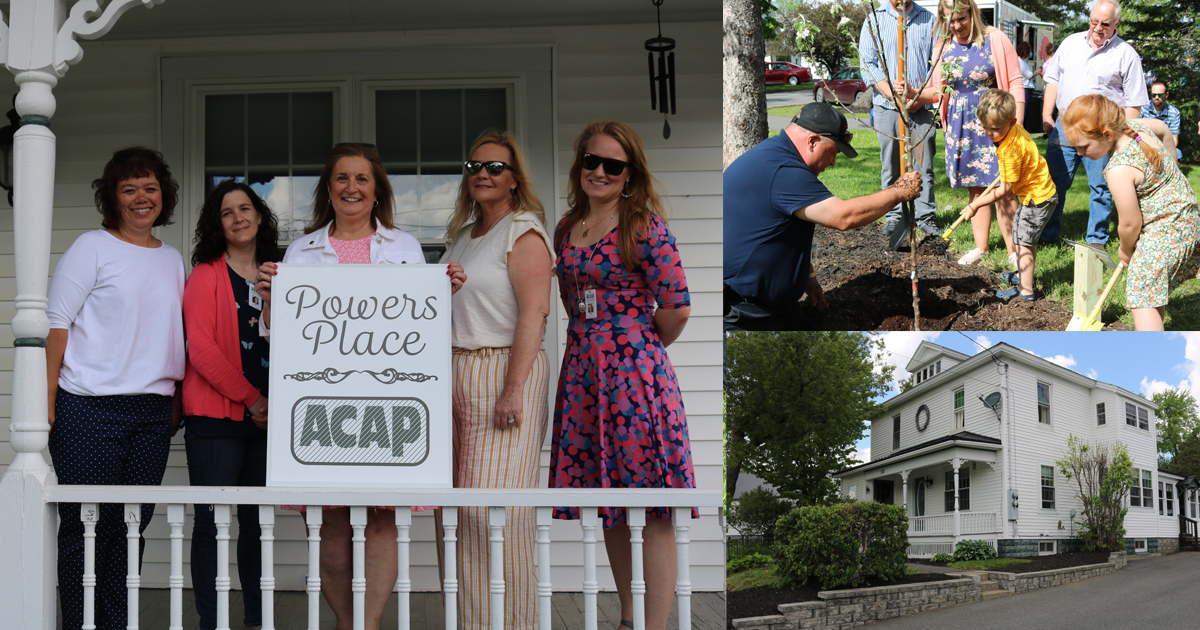 One of the most well-respected leaders in early care and education in Maine, and a beloved cook who provided nourishing meals to over a hundred County preschool-aged children daily and recently lost her battle with cancer, were both recognized for their numerous contributions recently by Aroostook County Action Program.

Sue Powers, ACAP’s Director of Programs, who marks 40 years with the Agency this summer, and Valerie Delong, an early care and education program team member, who served the agency for 23 years - including most recently as cook at the Gouldville Center in Presque Isle, were both honored at a June 4 ceremony.

The afternoon event was held to acknowledge the outstanding efforts and thank Agency staff for their work through the COVID-19 Pandemic.  Attended by ACAP employees, retirees, Agency Board members, community leaders, and family members of both Powers and Delong, the celebration was held at the 50 Park Street property, adjacent to the Gouldville facility, which ACAP has recently acquired to support its growing Early Care and Education programs County-wide.

In what was a surprise to Powers, ACAP officials announced, at the event, that the former private residence that sits on the Park Street property, is being named “Powers Place” in honor of the leader and long-time advocate for young children and their families.  The decision to name the facility, which will house the leadership team for the Agency’s Early Care and Education programs, including Powers’ own office, later this summer, was made official by the ACAP Board of Directors in April.

“Through my own experience as an early care and education professional, I have interfaced with many child care programs in Aroostook County and other parts of the state.  Under Sue Powers leadership, ACAP stands out as the program with the greatest emphasis on quality and parent engagement,” said ACAP Board Chair Trudy Gorneault.  “It is a most fitting honor and tribute that we name this facility ‘Powers Place,’ in Sue’s honor, as generations of families have, and will continue to benefit from her life’s work.”

In addition to her four decades of work in Aroostook County, ACAP CEO Jason Parent recognized Powers for her work statewide, and the tireless efforts she has led to help families the Agency serves get through some of the darkest days of the pandemic.

“The list of roles she has held is long – from leader of Maine’s Head Start Directors Association to her more recent seat on the early childhood task force of the Governor’s Children’s Cabinet.  In official role or not – she’s the voice of Early Childhood education recognized statewide and we are most fortunate to have her,” said Parent.   “At no time in her career has that been more the case than through this pandemic.  Sue never stopped.  She and her team met and exceeded the overwhelming new mandates for COVID safety, mobilized remote learning, initiated the delivery County-wide of more than 100,000 meals – and so much more.  She did some of her best, most innovative and creative work during this pandemic.”

At the conclusion of the remarks by Gorneault and Parent, Powers’ family - her husband of 40-years Joe, two daughters Kaitlyn and Michaela, and granddaughter Piper - came forward with a sign that will be added to the property when the staff move in later this summer that reads “Powers Place.”  ACAP’s facilities team followed with a special chair that has been refurbished, known as the “Head Start Director’s Chair,” that has been passed on at ACAP from one Head Start Director to the next.  The chair is the first piece of furniture moved into the new property.

Just prior to the recognition in her honor, Powers herself joined Parent and those gathered in paying tribute and memorializing the impact of veteran ACAP employee Valerie “Val” Delong.  Delong who served a number of roles with the Agency over her more than two decades, including classroom teacher, was most recently the cook at the Gouldville Early Care and Education Center in Presque Isle.

“Val never said ‘no’,” said Powers in her comments.  “That was especially true a year ago at this time when she, and others, were responsible for preparing over 100,000 home delivered meals for families across our region at the height of the pandemic.  Val had a heart and passion for the children and families we serve.  It was an honor to call her a colleague. She was taken from us too soon.  Her memory and legacy with ACAP lives on.”

To celebrate her life, and recognize her contributions to ACAP, the Agency invited Val’s husband Keith, daughter Gretchen and her husband Tyler Michaud, and two grandchildren Ellie and Eddie, to plant an apple tree on the site of the new addition to ACAP’s 44 Park Street campus as part of the event.  The tree signifies Val’s many contributions to the Agency, her spirit, love for children and the nourishment she provided them daily.  Powers shared that she hopes that one day, when the tree bears fruit, that children from the Gouldville Center will walk over with their teachers and pick apples to make applesauce in Val’s honor.

In addition to moving staff into the home on the former 50 Park Street property over the summer months, the Agency will add parking spaces to the new combined 44 Park Street lot to serve both the team members that will be located in the facility, which will not be open to the public.  The extra parking will also serve the adjacent Gouldville Center, which did not have enough spaces to facilitate the staff and visitors to the school building.  This is especially the case with the recent addition of two childcare classrooms this spring, which added 24 children and associated staff accessing the school building daily.